The Radish: Who knew? 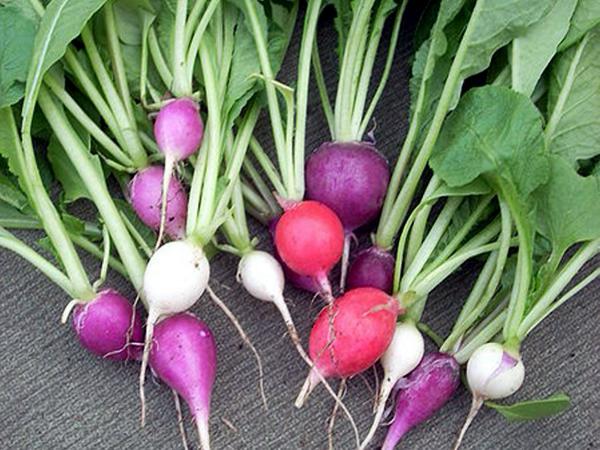 Having been born into a German-speaking family, I knew at an early age that my last name means “radish.” It wasn’t until recently, though, that I realized that I had never looked into the history of this crisp and spicy root vegetable that also happens to be my namesake. I’ve set about to remedy that.

The common English name “radish” comes from the Latin “radix” meaning “root.” Greeks called it “raphanus,” meaning “quickly appearing.” Ancient records in both cultures made frequent reference to the radish, so it’s logical to assume that it was a well-established crop in those cultures. Egyptians were also radish fans, having grown them for many centuries, even before the pyramids were built. And while the pyramids were under construction, workers were paid, in part, with radishes. The country of origin is thought to be China, where they’ve been growing for several millennia.

Many cultures consider the radish to have medicinal properties. Avicenna, a Persian physician more than 1,000 years ago, prescribed radishes to combat coughs, rheumatism, gallbladder problems, flatulence, diarrhea, headache, bad breath, dental cavities, and insomnia. During the Middle Ages, Europeans believed that radishes could cure indigestion, constipation, and even insanity. In 16th century England radishes were touted as a remedy for kidney stones, intestinal worms, and facial blemishes. Small wonder, then, that the radish became a staple in vegetable gardens and found its way to this country via the first English colonists.

Today we know that radishes do indeed promote good health. They are a good source of vitamin C, and low in fat and calories. The beta-carotene in radish leaves is known to be a powerful antioxidant, and researchers are currently studying it and its ability to combat or prevent many types of cancers.

But that’s not all. The nutritional value of radishes is amazing. Below is a modern-day analysis of radish nutrition.

How to grow them

Radishes will grow in most any soil but prefer light, sandy loams in full sun. When sowing, cover seed just to its thickness. Many radishes grow rapidly, germinating in three to seven days and reaching maturity in just three to four weeks. In most of the temperate regions in the U.S., they are in season from April to June and again from September until late fall or even early winter. In warmer climates, radishes are normally planted in the fall. Gardeners can extend harvests by repeated sowings, spaced about two weeks apart.

Radishes come in four main types, according to the season in which they’re planted: spring, summer, fall, and winter. Their shape and size vary greatly as does their length and color. There are red, pink, white, gray-black, and yellow ones, having either rounded or elongated roots. The largest ones can weigh over 100 pounds.

Since radishes mature so quickly, they make an ideal vegetable for children to plant. They can observe the various stages of growth without having to wait for an extended period to experience the results of their labor.

How to eat them

The entire radish plant is edible. We’ve already seen how beneficial the leaves are. Cooks may use them to flavor soups or sauté them as a side dish. Seeds and flowers can be used as crunchy and spicy additions to salads. (Seeds of some varieties are 48% oil, which, when extracted, is used as a lubricant or in the manufacture of alternative fuels.) Unripe seed pods make an excellent stir fry ingredient and can also be pickled and served with meat. The seeds are easy to sprout, and the sprouts can be eaten in salads or sandwiches.

In Asian countries radish roots are usually peeled and are cooked just as potatoes, carrots, or turnips are. In Elizabethan England, radish roots were eaten raw, primarily as an appetizer. Early settlers in the U.S., on the other hand, ate them as part of breakfast, lunch, or dinner. They were often served with salt (into which to dip the roots) and accompanied by bread and butter. Today they are also chopped or sliced and added to salads.

Nutritious, flavorful, crisp, and spicy, radishes have been boosting the health of humans for millennia. Have you had your radish today?

Check out the heirloom radish in our seed bank here: https://cottageinthemeadow.plantfans.com/ListByTag/OLD_AMANA_VEGETABLES

Percentages are the US recommendations for adults.
Source: USDA Nutrient Database

Like to try something a bit different? Why not serve up some radish chips?

Preheat oven to 350 degrees. Slice radishes, approximately ¼ inch thick, into microwave safe bowl. Cover bowl with plastic wrap and place in the microwave for about 40 seconds to soften slices. Remove plastic wrap, drain any liquid, and pour slices into larger bowl. Add olive oil and seasonings. Mix well to coat thoroughly. Place slices on a baking sheet lined with parchment paper. Bake for approximately 15 minutes, then flip slices, reduce heat to 225 degrees, and bake for another 20 minutes. Check chips occasionally as they bake. When crisp and browned, remove from oven and serve.