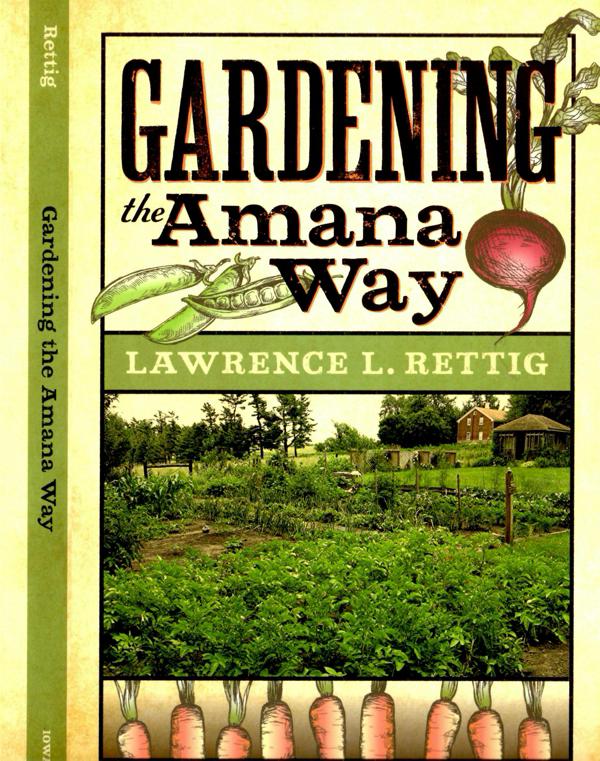 In addition to maintaining Cottage-in-the-Meadow Gardens with my wife, Wilma, I'm a garden writer for three internet sites (National Gardening Association, Dave's Garden, and Cubits) and a local newspaper. I've also written several books, the latest one being "Gardening the Amana Way," published by The University of Iowa Press. It was a fun and fascinating book to research and write, because it allowed me to live vicariously in an era of history when my little village of South Amana was part of a communal society that consisted of seven villages here in the state of Iowa. More on the society's history here: http://www.amanacolonies.com/history-of-amana/.

If you'd like to purchase an autographed copy from me, the price is $25.00 plus $4.00 shipping. You may order it by emailing me at the address in the lower right corner of this page. You may also order it from Amazon, Barnes and Noble, and from The University of Iowa Press (http://uiowapress.org/books/2013-fall/gardening-amana-way.htm).

"Gardening the Amana Way" has received very favorable reviews. Below is a sampling.

In an informative and engaging style, Lawrence L. Rettig gives a well-researched and fascinating account of the history of gardening in the Amanas from its early influences, including King Ludwig of Bavaria and the neighboring Meskwaki Indians, to the gradual shift from vegetable to flower gardens after the Great Change, when the Amana Colonies abandoned communal life during the Great Depression. Rettig takes readers on a tour of his own garden, which is listed in the Smithsonian’s “Archive of American Gardens.” Trellises and plants distinctive to the Amanas, seed saving, recipes, fermentation and preservation, and crafts are all included. Old-time black-and-white photographs capture both the hard utilitarian work and the bits of fun that went into Amana planting, cultivation, and harvesting rituals. Contemporary color photographs accent the beauty and grace of today’s flower gardens.

“Gardening the Amana Way” should be on the shelf of every gardener in Iowa and beyond the boundaries of the state. The book is written by a gifted gardener, a descendant of the original settlers of the Community of True Inspiration who was born in the Amana Colonies and who has been committed to a home and small plot of land for decades. Rettig and has spouse have carefully preserved a foodways tradition that should be of interest to folklorists, historians, agronomists, chefs, and anyone interested in local and regional food systems. Through horticulture, the book provides significant insight into one of Iowa’s most intriguing immigrant early settlement communities.

From readers on Amazon.com:

(1) An enjoyable and knowledgeable book about Amana's history and gardens
By Beth in Iowa on November 19, 2013

Living only about 20 miles from Amana as the crow flies and having read Larry Rettig's articles on the Dave's Garden website, I was aware of his historical Amana garden, and I was very excited to see that he has published a book about his garden.

The first three chapters give a brief overview of the history of the Amana communal villages where he lives and gardens (a German religious group, fleeing persecution in the 19th century, emigrated and started a religious commune in New York state before relocating to Eastern Iowa in the 1850s). I was aware of the Amanas' general history, but Rettig's lively retelling filled in important details in an enjoyable-to-read way, and fascinatingly, focused on the life of one particular emigrant who was instrumental in bringing the tradition of ornamental flower gardening to the Amanas.

As a strict religious community, non-productive gardening (not vegetables and fruits) had been verboten until this man's background opened the door to planting flowers. (I have noticed that interest in gardening in Iowa still centers around vegetable gardening -- if you mention you are planting a garden, people nearly always assume you mean vegetables.) And the Amana residents produced with a vengeance in their communal gardens, as Rettig illustrates: included in the book are astounding historical photos of workers alongside the tons of potatoes, cabbages, lettuces, etc. that were grown and processed by the religious order, along with details about how each vegetable was grown.

A short chapter covers the vegetables grown today by Rettig's wife, Wilma, giving details about some of the more unusual historical varieties that they grow and save seeds for in the seed bank they started in the 1980s.

But then we get to the subject that is obviously closest to Rettig's heart: his lovingly designed ornamental gardens. A detailed tour of his garden areas, with a number of color photos in the center section of the book, guides us though the gardens he has labored over since Wilma inherited the house in 1984 (the house has been in her family for over a century). Much detail is given about Rettig's favorite plants, some of which are quite rare in the United States, and he relates some of his gardening philosophy, as well as giving a few tips for planting times in spring and other advice. (Note: A map of the layout of his garden would have been very helpful while reading the garden tour section, but those are lamentably rare in garden books.)

A short chapter of heirloom recipes and a final chapter covering garden crafts wraps up what is an enjoyable and knowledgeable book about the history of Amana gardens as well as about one man's gardening life. There are very few books about gardening in Iowa, and this is a valuable and welcome addition. And after reading about his gardens, I'm tempted to take up Rettig's generous offer of personal tours when warm weather comes again to Iowa.

More than a gardening book, the author gives the history of the Inspirationists who lived and worked in Iowa's Amana Colonies, some of their "rules" in living in a community, and large-scale meals prepared including recipes. Of course, gardening techniques and the evolution of the Amana gardens was of particular interest. This is a must read for gardeners and cooks!

This book is a great read that includes photos of the many plants Larry talks about and includes many recipes as well which is always a bonus.